In May and June of 2013 I held my first Dustbin Diet course at Marlborough school, Woodstock, with around a hundred and eighty Year 8 students.

We opened the session with a thought provoking short film trailer by photographer, Chris Jordan.

Here's the link if you'd like to take a look: http://www.midwayfilm.com.

The course had been kept a big secret.  The students and their parents were told that over the next few weeks they would be involved in an exciting project. (Yes, you bet, I was ecstatic that the teachers were so excited about my project!)  But the students had no idea what the course was about and what they were going to be doing.

As they watched the film, the room was in silence.  It was very moving.  I find it difficult to watch without a tear in my eye.

So in an atmosphere you could cut with a knife, the lead teacher, Mr Easterbrook, introduced me, and told the students that we were about to embark on something very powerful together, in relation to the film they had just seen.

There was an air of intrigue.  They all looked a bit unsure of what was about to happen.  But I've found that when people are a bit baffled, they tend to be very honest.  They don't know what's happening, so they can't think too deeply about the answers they are giving.  And when that happens, it is a good time to get an honest survey.

I first of all asked everyone to raise their hand if they recycled.  I know that Oxfordshire has pretty good recycling rates, and I've even been out with the recycling team supervisor in the catchment area for Marlborough school, so it was no surprise to me that everyone put their hand up to say they recycled.

But the next thing that happened blew me away! We'd move on to talking about landfill bins.  I asked them to stand up if they also used a landfill bin.  Not surprisingly, most people stood up.  But next, I asked them to sit down if they thought that, when they put their bin out for collection each fortnight,  it was mostly full up. 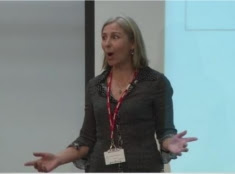 I couldn't believe how many people sat down.  I think you could see horror in my eyes!  And this was in an area I knew was pretty good for recycling.  Where did they get all their rubbish?  How did they manage to fill up a wheelie bin in just two weeks?  I can't remember the last time I put my bin out.  I certainly haven't yet put it out in 2013.  So to see a whole room full of people saying that they filled their bin every two weeks - well, my face says it all, doesn't it?

You can see some of the bin surveys on the photo gallery page of the Dustbin Diet website.

So, what else did we cover on our Dustbin Diet journey?

We looked at the differences between linear economies and circular economies.  We talked about the waste hierarchy.  We used story telling to understand 'habit' and we played some games to help us understand change management.

For the whole course, each student had the loan of a copy of 101 Ways to Live Cleaner and Greener for free, and they jumped at the idea of making their own version of the book.

Over the four week period, the students spent some time discussing and thinking about how they could live cleaner and greener for free.  The talked about it in assembly and in additional PSHE lessons they played some of the games developed to encourage a closer read of the facts and figures in the book and made posters about living cleaner and greener.

They had a collection box, in which they could submit their ideas and illustrations for the tip pages and the box gradually filled up.

When Mr Easterbrook delivered the said box of tips to me over the half term break, it was like opening up a goldmine.  There were some thoughtful contributions, some excellent tips and some great art work.  Some of the contributions demonstrated the need to delve deeper into the waste hierarchy as a concept and so deeper we delved.

By the fourth and final session, we had the makings of a book and we looked at it together in its pdf form on screen.  Watching the students' faces as they saw their tip come up on screen was truly magical.  For me it was the culmination of five years of research and development, but for all of us it was also the start of something new.  A waste revolution.

Was it worth it?  Well here's something that tells me it most certainly was (or indeed is)...

Two of the students wrote reviews of the book and the workshops.  Here they are for you to see. 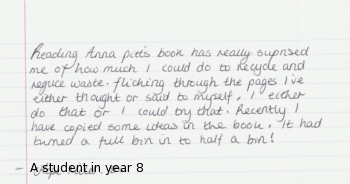 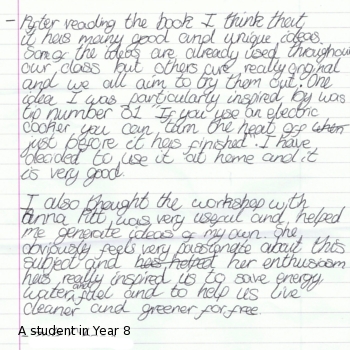 In my next post, I will give you a sneak preview of some of the students' fantastic work!

If you would like to run a Dustbin Diet workshop in your school, take a look at the website for more information and booking details.